Lady Gaga surprised Little Monsters on Friday morning by dropping the colorful, enchanting video for 911. It opens with a masked Gaga laying in the middle of a desert. She follows a mysterious figure to a village at which point the song’s beat kicks in and things get very interesting. The clip is packed with the kind of daring fashion we’ve come to expect from Gaga. Also she is flown like a kite by a muscled, shirtless man. It’s a lot but the whole things appears to be a tribute to the 1969 movie The Color of Pomegranates.

Avril Lavigne has some kind of news to announce today. She dropped a vague teaser on social media yesterday afternoon, leaving fans wondering what she could be gearing up to reveal. Based on the top comments, many fans are hoping the announcement will be about new music to follow the release of her 2019 album.

I’m so excited to invite you to join me and some VERY special guests for #FightLyme, a virtual concert to benefit the Lyme community. 100% of the proceeds go to The Avril Lavigne Foundation and Global Lyme Alliance. Since Lyme disease is a global pandemic but not a global priority, we need all the help we can get to eradicate Lyme. Not being able to bring my show to everyone in person this year, I thought it was a good time to have some fun while we raise funds. Please join us on October 24. Tickets are on sale now at www.AVRILLAVIGNE.COM, along with an exclusive event t-shirt and a limited number of VIP Soundcheck passes! Your ticket purchase helps us save lives. See you at the show!

Selena Gomez went public Friday night with a private message she sent to Facebook’s Mark Zuckerberg and Sheryl Sandberg. Gomez who counts 193 million followers on Instagram and more than 77 million on Facebook, called out the founder and CEO with a plea to start a dialogue on the hot button issues of misinformation and hate speech. She said we have a serious problem. I’m calling you both to help stop this. Shut down group and users focused on spreading hate speech violence and misinformation. Our future depends on it. 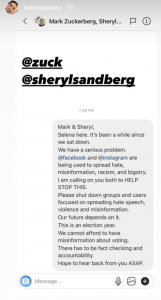 Billie Eilish has been hunkered down at home for months during the COVID-19 lockdown while it seems others are ignoring recommendations to physically distance and wear a mark. Eilish took to her socials to say funny how I haven’t hugged my best friends in six months and y’all are out here partying….funny. So she’s calling out the influencers and party animals out there…just stop.

Billie Eilish CALLS OUT INFLUENCERS Going To Parties. She says she hasn’t hugged her best friends in 6 months.

What are your thoughts? pic.twitter.com/BVOERgNL60