Jason Derulo and Adam Levine joined forces for the first time on their new collab Lifestyle. They marvel at a high roller whose life consists of diamonds and dollar bills while wondering if she’d go out with them if they were broke. Derulo also released a rich dance visual for Lifestyle that will sure make the rounds of his TikTok domain. Derulo said it’s one of top favorite songs he’s done.

Halsey has officially called off her long-postponed Manic World Tour. She took to Twitter to announce the cancellations, citing health and safety concerns due to the ongoing pandemic. Halsey said safety is the priority. I wish things were different. I love you. Dreaming of seeing your faces again. Don’t think we could summarize things any better right there. You can read her full statement:

(18) h on Twitter: “Safety is the priority. I wish things were different. I love you. Dreaming of seeing your faces again. @halseyteamhelp can answer specific questions. https://t.co/SA44izGQ9L” / Twitter

The NFL invited 7,500 health care heroes who have already received both doses of the COVID-19 vaccine to the Super Bowl. Those essential workers will get to see the game and the already announced festivities and they’ll also get to the experiencing seeing Miley Cyrus perform life. Cyrus will be at the Super Bowl for the TikTok Tailgate pre-show, where she’ll perform in honor of these special guests. Cyrus cannot wait to peform either. The TikTok Tailgate can be watched on Feb. 7 at 2:30PM either on TikTok or CBS.

(18) Miley Ray Cyrus on Twitter: “SUPER BOWL LV!!! 💗 🏈 I’ll be there for TIKTOK TAILGATE!!! I can’t wait to put on a show for the NFL’s honored guests before the game…. Health care workers from Tampa and around the country!  Join the tailgate at 2:30 PM ET FEBRUARY 7 on @tiktok_us @ @cbstv ! #SBLV https://t.co/MBibfx8XxF” / Twitter

The box office dominoes are falling-again. Minutes after MGM announced it was pushing No Time to Die from April to October, Sony announced a raft of high-profile changes to its spring and summer calendar amid the pandemic and uncertainty as to when moviegoing will resume. Kay Cannon’s Cinderella which had been set to open Feb. 5, will now go out July 16. It stars Camila Cabello in the title role. Peter Rabbit 2: The Runaway is moving from April to June 11, while Ghostbusters: Afterlife is being pushed from June to November 11. 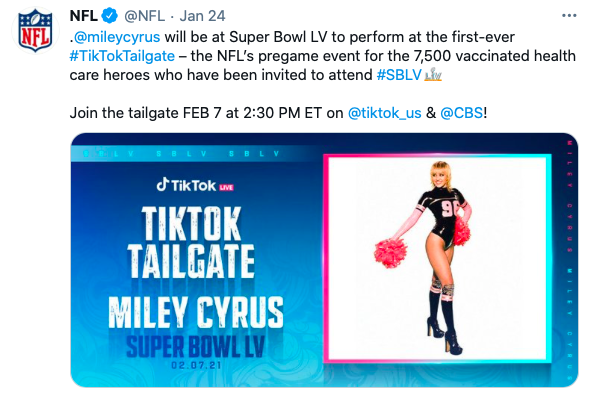